Think Medicare is confusing?
You're not alone.

What kind of experience do today's Medicare beneficiaries have when signing up for Medicare or making changes to their existing Medicare plan?

What are peoples’ satisfaction level with their current Medicare coverage?

Through a survey conducted in October 2012 of over 850 Medicare beneficiaries, 65 Incorporated struck out to answer these questions.

Grab the complete report today to learn all of the alarming finding of the survey, such as:

*Editor’s Note:  The level of dissatisfaction most likely connects with the frequent changes in medication coverage and cost. Those without drug plans do not deal with these issues.  However, they face dissatisfaction for other reasons, such as unexpected out-of-pocket drug costs when they become sick or a Late Enrollment Penalty when they eventually enroll in a drug plan. 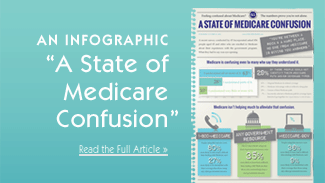